Regarding the substitutes, the Directorate has clarified the engament of substitute in leave periods and guidelines of substitute arrangement in the place of GDS posts w.r.t letter dated 20/21-10-2002. 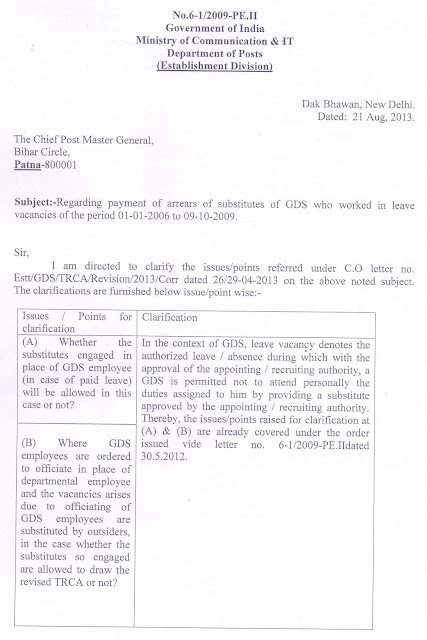 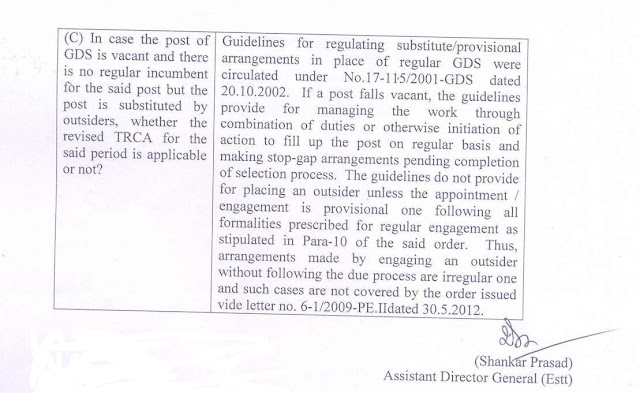 Consequent upon the implementation of One Man Committee recommendations, the matter regarding payment of arrears to the substitutes of Gramin Dak Sevaks who worked in leave vacancies from 01-01-2006 has been reviewed.

2. It has now been decided that the arrears of allowances of the substitutes of Gamin Dak Sevaks who worked in leave vacancies from 01-01-2006 to 09-10-2009 may be paid on the basis of minimum of TRCA.

3. The amount of arrears admissible as per extent rules may be paid to the genuine substitute. There should not be any double payment. Before making payment, the DDo or paying authority should take very precaution in this regard.

4. Necessary provision in budget should be made at appropriate stage and availability of funds will have to be ensured before incurring the proposed expenditure.

5. The actual expenditure incurred may be informed to this office immediately after payment of arrears.

References are received from Circles for regularizing the employment of substitutes provided by regular GDSs during their periods of leave/absence on the ground that they have been functioning in that capacity “for a longer period”. A number of cases also stand filed in the Tribunals and Courts on this issue. Apparently instructions issued from time to time are not followed rationally by competent authorities in allowing substitutes to continue indefinitely or for long periods.

2.       In this context, I am directed to draw your attention to the DG (Posts)’s instructions given below Rule 5 of the P&T ED agents (Conduct & Services) Rules, 1964 corresponding to Rule 7 of the Gramin Dak Sevaks (Conduct & Employment) Rules, 2001 which, inter alia, stipulate the following.

“During leave, every GDS should arrange for his work being carried on by a substitute who should be a person approved by the authority competent to sanction leave to him. Such approval should be obtained in writing” and that:

3.       Instructions issued vide, this office letter No. 18-37/92-ED & TRG, dated 25/11 enjoined all Divisional Heads to ensure that long leave beyond 180 days is not granted to GDS as a matter of routine to avoid substitutes continuing in place of regular incumbents for long periods.

4.       Subsequently, vide letter No. 19-6/2000-ED & TRG, dated 29-12-2000, the decision of the large bench of CAT Bangalore on the issue of whether weightage should be given to persons who have rendered past employment on provisional basis or in the capacity of substitute or GDS, was circulated. Recently, vide letter dated 19.02.2002 the judgment of the larger bench of CAT Bangalore mentioned above, has also been circulated. The said judgment clearly reiterates the position that the substitutes have not legal right as far as regularization in the Department is concerned. It also takes note that the Department’s Recruitment Rules for Gramin Dak Sevaks do not provide for recognization of past service that may have been rendered by them against any post.

5.       In the case of Deviks Guha v/s Union of India, the Supreme Court has also not recognized the right of the substitutes for regularization. On the other hand the Apex court has maintained that substitutes have no legal claim in the basis of having worked continuously and if there are cases where the substitutes have worked for a “longer period” it is for the Department to consider the same as to whether there was a proper case for absorption or not, and pass appropriate orders.

6.       The matter has been examined in consultation with Ministry of Law. Since the Apex Court has hold that substitutes have not legal claim there can be no definition of the term “longer period” as absorption of substitutes per se on regular vacancies without following prescribed procedures of recruitment could lead to nepotism.

7.       Thus, it has become necessary to review and reiterate the existing guidelines relating to “substitute” arrangement of GDSs. This would also involve clarification of the status of the substitute, who is provided at the risk and responsibility of the regular incumbent, vis-a-vis provisional appointees, who are appointed by the Department to meet an interim need.

8.       As per extent orders, a regular GDS is required to provide a substitute at his own risk and responsibility but subject to approved by the appointing authority. Hence it is the duty of the appointing authority to ensure that any ineligible person is not approved as a substitute and any “substitute” arrangement is not allowed to continue for long periods. Accordingly, the following guidelines may inevitably be kept in view while dealing with matters relating to “substitute arrangements” or their continuance”.

(i)      Before resorting of substitute arrangement the following options may be explored:
(a)          In case of short-term arrangements, as far as possible, work will be managed, by combining duties and “substitutes” will not be provided in leave arrangements. In single handed BOs, the work shall be managed by giving combined duty to GDS Mail Deliver/Mail Carrier (Gramin Dak Vitaraka/Vahak) of the neighbouring BO/SO in whose beat the BO falls.
(b)         Even in long term arrangements, the combination of duties as in a) above will restricted to; substitutes will be allowed only if work load of the BO as well as its financial position justifies which engagement or filling of the post on regular basis.
(c)          In towns and cities, where departmental officials are also available in the same office, the possibility of managing the work by regular staff by combination of duties or by grant of OTA beyond normal working hours may be explored.
(ii)    If substitute arrangement is found to be unavoidable then it should be ensured that
(a)          No substitute will be allowed to take over charge unless the competent leave-sanctioning/appointing authority is fully satisfied that the substitute possesses all the qualification prescribed for that appointment and has been provided under the risk and responsibility of the regular incumbent.
(b)         Drawing & Disbursing authorities shall not draw allowance of a substitute unless the claim is accompanied by a certificate from the competent authority about the possession of requisite qualification by the substitutes and their approval for making continuing the arrangement.
(c)          Continuation of substitute arrangements beyond 180 days at a stretch may only be allowed by the authority next higher to the appointing authority and only in exceptional cases where action has been initiated for regular appointment, if justified by work load and financial norms.
(d)         No substitute arrangement shall continue beyond one year. Hence regular/alternative arrangements must be made during the period beyond 180 days to ensure this. If for any unavoidable reasons a substitute arrangement is required to be continued beyond one year, specific approval of the Head of Circle will be necessary for reasons to be recorded by the concerned authority.

9.           In the case of provisional appointments, it is clarified that such appointment should be resorted to only in case where the GDS is unable, quite unexpectedly, to undertake his duties due to his own action (unauthorized absence, fraud, misappropriation etc.). Due to circumstances beyond his control like sudden serious illness/accident/death or because the department does not want him/her to continue (due to reasons of misconduct/dismissal/removal/put off duty etc.) in all other cases, action should be taken well in advance to fill the post on a regular basis. Even where the post falls vacant unexpectedly, efforts should be made to manage the work through combination of duties as spelt out in Para 8 (i) (a) & (c). Similarly even in case of long term deputation of GDS to APS, action may be taken to full up the post on regular basis and the GDS, on return from deputation may be suitably adjusted against vacancies in existence at that given time.

10.                        Where provisional appointment becomes unavoidable, action may be initiated to all the posts following all the formalities prescribed for regular appointment, but clearly stipulating that the appointment is on a provisional basis. On no account should a provisional appointment be made without following every formality that is prescribed for regular appointment. Since the whole process will take a period not exceeding 60-90 days, stop gap arrangement may preferably made at the local level in the interim through combination of duties or by allowing the GDS from a neighbouring office to function, or by deploying a Mail Overseer to look after the work. Under no circumstances should such local arrangement exceed 90 days, approval of the next higher authority is to be taken on a one time basis for reasons to be recorded in writing.

11.    In cases where the incumbent dies in harness there is no objection to a dependent being allowed to function on interim basis provided the dependent fulfills the qualification/relaxed qualification applicable for post fallen vacant? This may only be resorted to if arrangement by combination of duties is not feasible. However, in such case also such interim appointment should not exceed one year and every effort should be made to take a final view within that time frame. It also needs to be clearly stipulated that such provisional appointment does not entitle the dependent to claim for the post unless his/her case for compassionate appointment is approved by the Circle Relaxation Committee.

14.     If any previous instructions on the issues of ‘substitute’ and ‘provisional appointment’ are found contrary to these provisions, the same will stand superseded by the latter.

15.          Receipt of this letter may please be acknowledged to the undersigned.