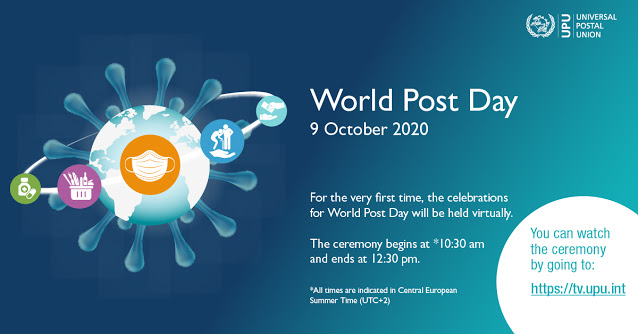 World Post Day is celebrated each year on 9 October. The event was declared by the 1969 Universal Postal Congress in Tokyo as a means to mark the anniversary of the Universal Postal Union's (UPU) creation in 1874.
The purpose of World Post Day is to bring awareness to the Post's role in the everyday lives of people and businesses, as well as its contribution to global social and economic development.
As a result, the UPU's member countries are encouraged to organize their own national activities to celebrate the event, including everything from the introduction or promotion of new postal products and services, to the organization of open days at post offices, mail centres and postal museums.
For countries participating in the UPU International Letter-Writing Competition, national winners are often honoured on 9 October.

The UPU helps facilitate awareness with its World Post Day by designing and distributing posters for display across the globe.
Although World Post Day is not guided by a particular theme, the UPU's latest poster design embodies the UPU's three strategic pillars: innovation, integration and inclusion.
Just as Posts innovate to remain relevant in the changing communication landscape, the UPU has chosen innovative designs for the new World Post Day poster. Using Pantone colour inks specially layered onto high-quality Swiss–made paper to produce the blue and gold design, the physical elements of the poster represent innovation unto themselves.
The emblem's design represents the two remaining pillars, integration and inclusion. The crisscrossed arms and layered colours act to show the integration of knowledge and processes, enabling seamless and affordable services for all. The intertwined design was inspired by the Celtic knot, which itself has Persian roots. Finally, the clasped hands represent how the Post connects and includes people around the world.
More than 80 Posts have ordered some 70,000 posters in seven available languages: English, French, Spanish, Portuguese, Arabic, Russian and Chinese.
In addition to the three-year poster campaign, UPU Director General Bishar A. Hussein also releases an annual message to celebrate the event. The Director General's 2016 World Post Day message will be released shortly.
For any question related to this event, please contact communication@upu.net.
//COPY//-SAPOST
Posted by P. Pandurangarao at 8:43 PM