Homage to Dada Ghosh on his 61st death anniversary!

Com. Bhupendra Nath Ghosh (B. N. Ghosh) who was respectfully called Dada Ghosh by the P and T Fraternity and the First Secretary General of National Federation of P and T Employees (NFPTE) left us 61 years back on 7th June 1961. 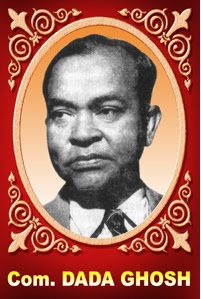 Dada Ghosh was the Circle Secretary of the Postal and RMS Union, Bengal and Assam Circle during the II World War period and toured the conflict areas of Assam during the bombing by the Japanese and gave courage to the Postal workers to stick to their posts and continue duties. He lost his wife and son, while he was on the tour.

As the first Secretary General of NFPTE, which was formed on 24th November 1954, he took initiative in forming the Confederation of Central Government Employees and Workers which along with AIRF and  AIDEF organised the historic 5 days strike in 1960 on the demand of Need Based Minimum Wage and DA according to cost of living index.

Red salute to Com. Dada Ghosh on his death anniversary!

(Collected from the wall of V A N Namboodiri )