AT ALL IMPORTANT CENTRES THROUGHOUT THE COUNTRY

MASSIVE PROTEST AGAINST THE BETRAYAL OF THE BJP-LED NDA GOVERNMENT 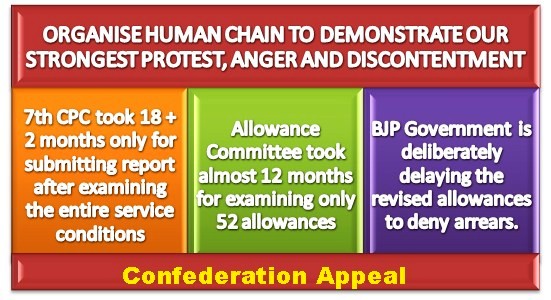 ·         High Level Committee, assured by the Group of Minsters, not yet constituted. First anniversary of the Hon’ble Cabinet Minister’s assurance will be on 30.06.2017. No increase in Minimum Pay and fitment formula.
·         7th CPC took 18 + 2 months only for submitting report after examining the entire service conditions, pay scales, allowances, Pensionary benefits of about one crore Employees and Pensioners including military personnel. Allowance Committee took almost 12 months for examining only 52 allowances!! BJP Government is deliberately delaying the revised allowances to deny arrears.
·         Option-I parity for pensioners recommended by 7th CPC and accepted (??) by cabinet, mercilessly rejected by appointing a feasibility Committee.
·         NPS Committee is for further strengthening NPS and not for withdrawal of NPS or for guaranteeing minimum pension as 50% of last pay drawn.
·         MACP promotion denied to thousand of employees by imposing stringent conditions on bench mark.
·         Gramin Dak Sevak Committee Report submitted to Government on 24.11.2016 (Seven months over) still under process.
·         Exploitation of casual and contract workers continues. Equal pay for equal work denid.
·         Autonomous body employees and pensioners cheated by Government by denying their legitimate wage revision and pension revision.
·         No negotiated settlement on the charter of demands submitted to Government by JCM (staff side) and Confederation.
ORGANISE HUMAN CHAIN TO DEMONSTRATE OUR STRONGEST PROTEST, ANGER AND DISCONTENTMENT
M. Krishnan
Secretary General
Confederation
Mob & Whatsapp – 09447068125
Email: mkrishnan6854@gmail.com

Posted by P. Pandurangarao at 9:30 PM