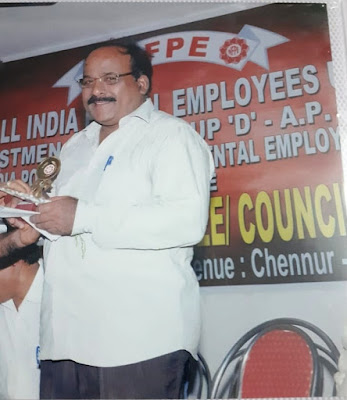 Com.R.Sivannarayana, former All India President, AIPEU GrC passed away today (afternoon) in Guntur (Andhra Pradesh).
For the last 3 months he was attended medical treatment in Chennai for his serious illness and return to Guntur two days back. He again admitted in hospital yesterday and breath his lost today afternoon at 02-30 hrs. Cremation of mortal remains of Com.R.S.N will be taking place tomorrow morning in Guntur.
He is very familiar with this cheerful appearance, bold, open mind, soft character besides his louder voice while making organizatioal speeches. A memorable personality in appearance and lovable in nature.
His journey from Division level to All India level is very inspirational and shows his commitment towards the banner of NFPE.
He extended his services for the Union from 1997 in various capacities in   P-III / AIPEU GrC CHQ viz., Vice President, Working President, Asst. General Secretary, Dy.Genl Secretary, General Secretary (Offg.) and All India President.(till his retirement) associated with 4 General Secretaries of Gr.C CHQ.
He served the Union by staying in CHQ, New Delhi for more than 6 six years and shared his life with Com.M.Krishnan & Com.K.V.Sridharan.
The contribution of his services in framing the publications of Gr.C CHQ (Venture, Hand Book, Pioneer, GDS Crusader etc.,) is remarkable and appreciated.
His services for the organizational activities of AIPEU GDS from Division level to All India level in all the Circles boosted for its growth and strength.
We lost a guide and good organizer for GDS Union but we make up ourselves to follow the commitment & dedication taught by him.
On behalf of AIPEU GDS CHQ, we dip our banner in respect of the demise of Com.R.Sivannarayana.
With deep grief, shedding with tears paying tributes to the departed soul of Comrade R.S.N & expressing condolences to the bereaved family members.
=P.Pandurangarao
General Secretary
AIPEU GDS