AGARTALA: Dismissing an inquiry against a retired employee of the state fisheries department, the chief justice of Tripura high court on Friday said that government employees can take part in political programmes, including meetings, and freely post their opinions on social media platforms, without attracting punitive measures under Rule 5 of the All India Services (Conduct) Rules.

Justice A Kureshi said that attending a political rally would not be considered as involvement in politics and government employees should have the personal liberty to post their opinions on social media.
Lipika Paul was dismissed from service on April 25, 2018, four days before her retirement, for taking part in a political programme in December 2017 and making a social media post against BJP.
"During election times, as is well known, political parties and their leaders as well as nominated candidates take out rallies and address public gatherings. Every person who is present in the audience during such addresses cannot be stated to have participated in the rally. The presence of a person does not either establish his or her political affiliation. A student of politics, an enthusiastic young man, a reporter or just a curious bystander - all are likely to be present in any political gathering. Even an opponent or a critic of a political party may also attend the gathering. Her mere presence at a gathering, therefore, without any further allegation, would not amount to her participation in such political gathering," the court order stated.
"I have taken note of the contents of the said post which originally was in Bengali and has been translated and presented before me. Nothing contained in the said post suggests canvassing for or against any political party. It only expresses certain beliefs of the petitioner in general terms. As a government servant the petitioner is not devoid of her right of free speech, a fundamental right which can be curtailed only by a valid law. She was entitled to hold her own beliefs and express them in the manner she desired of course subject to not crossing the borders laid down in sub-rule (4) of Rule 5 of the All India Services (Conduct) Rules."
Source : Times of India, 11 January, 2020 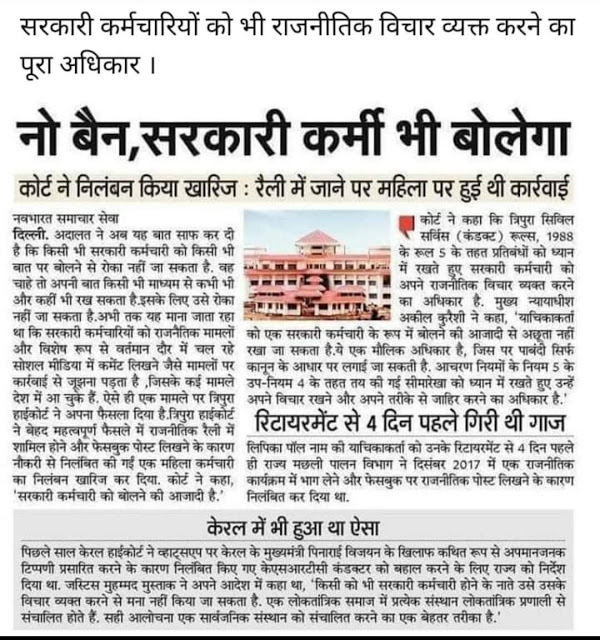 Posted by P. Pandurangarao at 9:02 PM