The Secretary General, NFPE met with higher officers of the Directorate regarding GDS Pay Committee implementation.

It is informed that the File under the consideration of JS & FA will be cleared with in two / three days and further procedure will followup.

Salient features of the revised scheme :
= previous point system has been dispensed with & new scheme extended to missing GDS cases also.
= The scheme will come into effect from the date of issue of this letter. Applicable to pending cases also.
= Already settled cases will not be reopened.
= Scheme will not be applicable for GDS working on ad hoc / provisional basis / substitute / trainee
= "Dependent family member" categorized in to 7
= Head of the Circle will be the competent authority
= Applicant should be eligible & suitable - as per the conditions prescribed for normal regular selection.
= Scheme will not be applicable for Notified / referred to Employment Exchange /  identified for surplus / redeployment cases
= Age : lower age limit -  18 years and above & upper age limit relaxation vested with the powers of HoC.
= No relaxation in the educational qualification prescribed.
= No time limit for application but within a reasonable time - cases will be considered and decided with in three months.
= Missing GDS cases : at least two years time from the date of missing. In case of missing the compassionate engagement is not be a matter of right.
= Prescribed pro forma may be used for application
= Speaking order would be issued by HoC on rejected cases.
= Undertaking in writing should be given by the selected candidate regarding the proper maintenance of the dependents.
= The power of termination of engagement on compassionate grounds are vested with HoC after selection. 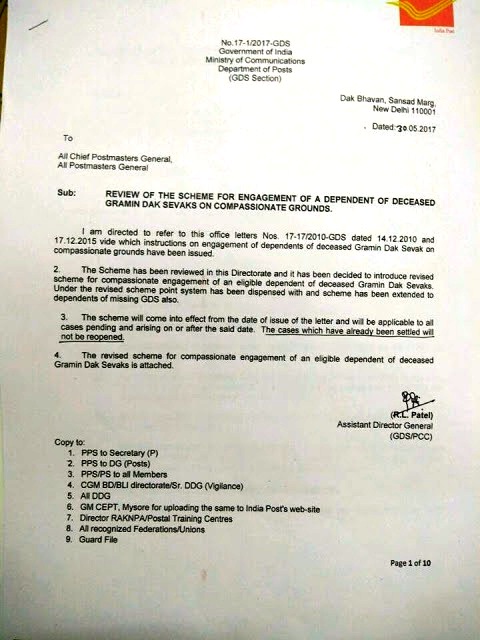 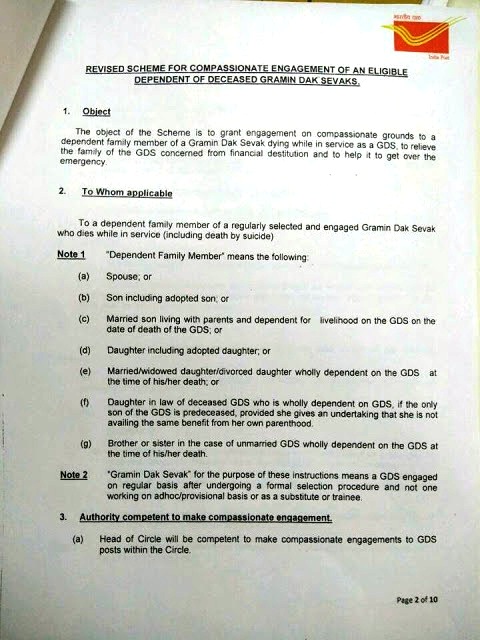 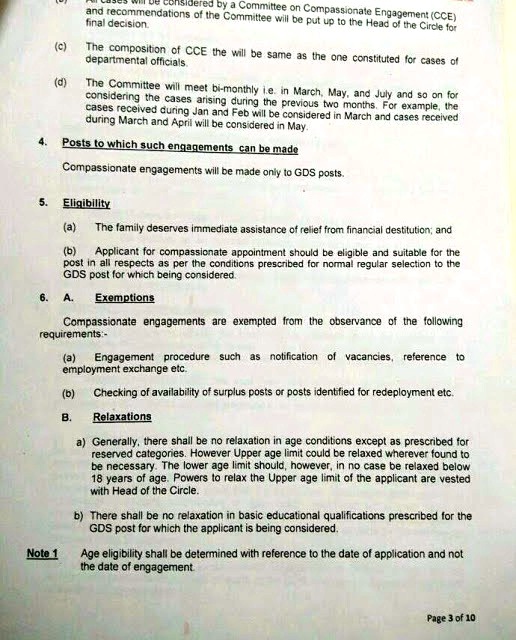 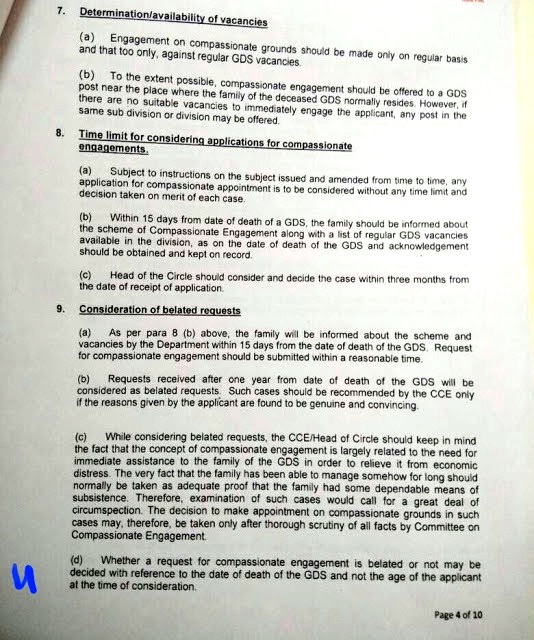 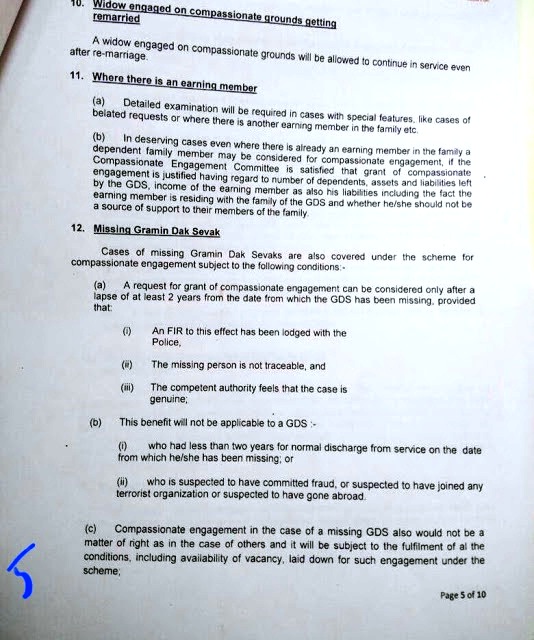 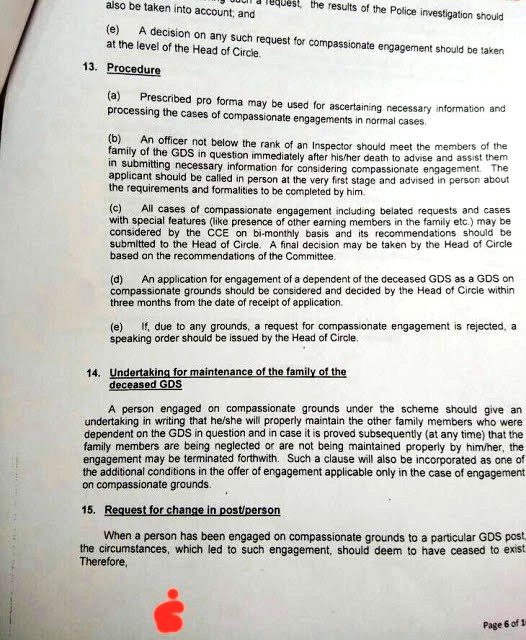 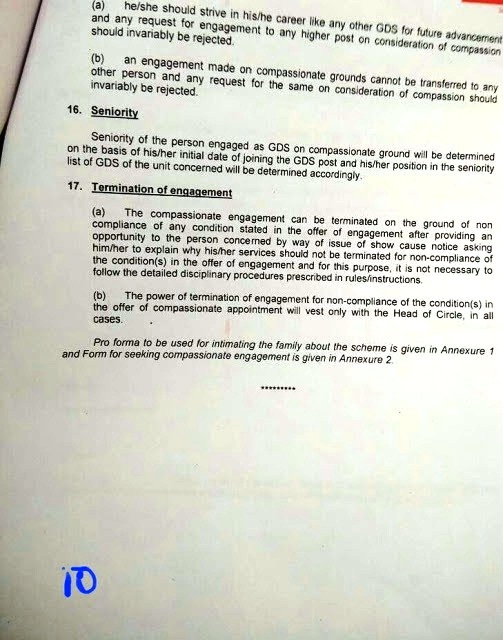 Expected Results Dates of Gramin Dak Sevak ( 2017) it's Not Official....may be modified or changed

NFPE & AIPEU – GDS has decided to organize serious agitaitonal programmes on the above two GDS demands culminating in strike.

Before declaring the strike date, NFPE & AIPEU-GDS has decided to organize a massive GDS March to the Communication’s Minister’s office (Sanchar Bhawan) on 27th July 2017 at 11 AM.

Quota fixed for the GDS participants from all Circles is as follows:

All CHQ Office bearers, Circle Secretaries are requested to mobilize minimum 5 GDS comrades from each division to participate in the programme.

Near by Circles viz., Uttar Pradesh, Rajasthan, Punjab, Haryana , Gujrat, Madhya Pradesh are requested to mobilize maximum number of GDS from the Divisions to make the programme a historic one i.e.,"March to Sanchar Bhawan" on 27th July 2017.

Please advice to book the tickets in advance and travel arrangements accordingly.

It is requested that necessary action may be taken for revision of minimum wage payable to Temporary status Casual labourers working in various Central Government department.

FOR THE CAUSE OF MOST DOWN-TRODDEN SECTION OF POSTAL EMPLOYEES

Demanding revision of wages of all Casual, Part-time, Contingent and daily rated mazdoors with effect from 01.01.2006 and again from 01.01.2016, as per the clear and unambiguous orders of the Postal Directorate extending the pro-rate minimum pay benefits of 6th CPC and 7th CPC.

As you are aware in Tamilnadu Postal Circle, the Circle and Divisional authorities are not ready to implement the orders of the Postal Directorate revising the wages of Casual, Part-time, Contingent and daily rated mazdoors issued consequent on revision of minimum pay by 6th and 7th CPC with effect from 01.01.2006 and 01.01.2016. All effort made by our Tamilnadu state unit with the help of NFPE Circle Unions could not yield the desired result and hundreds of low-paid casual labourers are suffering.

The Central Working Committee meeting of Casual Labour Federation held at Hyderabad on 22.04.2017, has decided to organize indefinite hunger fast in front of Chief PMG office, Chennai deamanding immediate revision of wages of casual, part-time, contingent and daily-rated mazdoors of Tamilnadu Postal Circle in consultation and with the active support and cooperation of NFPE Tamilnadu Circle Unions.

Accordingly, it is decided to commence the indefinite hunger fast on 27th June 2017 in front of Chief PMG office, Chennai. CHQ office bearers of Casual Labour Federation under the leadership of Com. M. Krishnan, National President shall sit on indefinite hunger fast. The Circle Coordinating Committee of NFPE Unions, Tamilnadu Circle, has decided to extend full support and cooperation to the struggle. Tamilnadu state unit of the Casual Labour Federation shall mobilise maximum number of Casual Labourers on all days of the hunger fast, infront of the Chief PMG office, along with the active support and participation of NFPE Unions.

Notice of the indefinite hunger fast will be served to the Chief PMG during the first week of June 2017.

Let us join hands together for the cause of the most exploited and marginalized section of Postal employees. Let us not forget, that “an injury to one is an injury to all”. We don’t want the mercy of the Postal bureaucrats, we want our right and we shall fight and we shall get it. We are ready for a do-or-die battle.

As per the decision of the Central Working Committee, the All India Workshop of All India Postal Casual, Part-time, Contingent and contract workers Federation will be held at New Delhi (venue will be intimated later) on 13.08.2017 Sunday.Maximum participation of delegates from all Circles should be ensured. (Minimum five delegates should participate from each circle) The workshop will begin at 10 AM on 13.08.2017 and will continue till 5 PM. Food and accommodation will be provided. Delegate fee Rs.300 per delegate. (Accommodation will be provided from 12.08.2017 afternoon to 14.08.2017 morning 10 AM). On 14.08.2017 there will be a one day Dharna in front of Dak Bhawan, New Delhi).

All delegates who are attending the All India Workshop on 13.08.2017 shall sit on one day dharna in front of Postal Directorate (Dak Bhawan) on 14.08.2017 Monday from 10 AM to 2 PM, demanding immediate settlement of the demands raised in the Charter of demands submitted to Secretary, Department of Posts.

Eventhough, we could compel the Postal Board to issue orders revising the wages from 01.01.2006 and 01.01.2016 as per 6th CPC and 7th CPC minimum pay, other demands are not settled. Postal Board has given in writing the item wise Action Taken Report on the Charter of demands of the Casual Labour Federation. We will be submitting another letter to Secretary, Department of Posts, seeking further improvement on each pending demands.

NFPE, Central Head Quarters and all affiliated Unions/Associations of NFPE has assured full support and cooperation for implementing the above decisions of the AIPCPCCWF.

PLEASE BOOK YOUR TRAVEL TICKET NOW ITSELF FOR 13.08.2017 AND 14.08.2017 DELHI PROGRAMME AS TRAIN RESERVATION STARTS FOUR MONTHS IN ADVANCE

To,
The Secretary
Department of Posts
Dak Bhawan,
New Delhi – 110001
Sub: - Remuneration to be paid to the Gramin Dak Sevaks engaged as substitutes in short-term vacancies of Postmen, Mailgaurd and MTS.

Para – 3 – “In future, GDS who are willing to work as substitute will be paid at the minimum pay of the respective levels of the Pay Matrix barring other allowances like HRA, Transport Allowance etc. with effect from 01.01.2016.”

It is requested to issue necessary clarification removing the ambiguity appearing in para- 3 of the OM.
Yours faithfully,

Copy to: -
All General Secretaries/Circle Secretaries of NFPE Unions
Posted by P. Pandurangarao at 10:36 PM

As you are aware, the Kamalesh Chandra Committee on GDS has submitted its report to Government on 24.11.2016. Now six months are over. The report is still pending in the Postal Board. After the approval of Postal Board the report is to be approved by Communications Minister, Department of Personnel, Law Ministry, Finance Ministry and finally Cabinet.

Government is trying to delay the implementation of the report indefinitely. It will take another one year, as per the existing file movement at Directorate. The recognised GDS Union has miserably failed and called off the indefinite strike without any settlement. Both recognised GDS Union and BMS union are indirectly supporting the Government’s plan to delay the GDS committee report and are cheating the GDS employees. NFPE and AIPEU-GDS cannot allow this situation to go unchallenged.

NFPE & AIPEU – GDS has decided to organize serious agitaitonal programmes on the above two GDS demands culminating in strike.

Before declaring the strike date, NFPE & AIPEU-GDS has decided to organize a massive GDS March to the Communication’s Minister’s office (Sanchar Bhawan) on 27th July 2017 at 11 AM. About 5000 Gramin Dak Sevaks from all the Circles (States) will participate in the historic Sanchar Bhawan March.

We shall not rest, till GDS employees demands are settled.

A DETAILED CIRCULAR WILL BE SEND TO ALL CHQ OFFICE BEARERS / CIRCLE SECRETARIES / DIVISION & BRANCH SECRETARIES OF AIPEU GDS.

START MOBILIZATION TO ORGANIZE THE AGITATION PROGRAM AT SANCHAR BHAWAN, NEW DELHI ON 27-07-2017 & MAKE IT A GRAND SUCCESS.