Within a year of joining the e-commerce bandwagon as a distribution channel, government entity India Post has transacted business worth Rs 280 crore in the Cash-on-Delivery (CoD) segment alone for firms like Flipkart, Snapdeal and Amazon.

While the amount of revenue generated for itself could not be ascertained, government officials said India Post is very keen on developing its e-commerce related services as a major revenue model going ahead.

"India Post collected over Rs 280 crore from consumers and gave it to e-commerce firms, since CoD facility was started in December 2013. The department with its huge network can serve as the best agency for not just delivering products, but also collecting money," a government official said.

However, this is a small chunk of the overall market size for e-commerce in India, which runs into billions of dollars already and is growing at a fast pace every year.

CoD has emerged as one of the most sought after services for e-commerce entities and 50-75 per cent of orders are placed with various online retailers with this payment option, while the remaining opt for credit card or bank payments.

In India, customers tend to prefer CoD as the online payment modes are yet to catch up in many parts of the country while many people are not comfortable with advance payments for products purchased online.

India Post has about 1.55 lakh post offices, making it the world's largest postal network. On an average, a post office serves 21.21 sq km area and about 7,175 people.

Another official said various e-commerce firms have been using India Posts CoD facility since it was introduced. Firms like Flipkart, Snapdeal, Amazon, Shopclues, Naaptol, Telebrands and Homeshop18 are some of them.

India Post has set up booking counters in the premises of some customers like Amazon and Naaptol, while for Snapdeal it is exploring setting up of e-commerce booking kiosks in post office locations.

Communications and IT Minister Ravi Shankar Prasad has also said previously that India Post is best suited to offer delivery services to e-commerce players, given its wide reach across rural, urban and semi-urban areas.

The Minister has directed officials from the Department of Posts to focus on opportunities in e-commerce sector.

India Post is also ramping up its infrastructure to grab a major chunk of the distribution, delivery or logistics, which will touch about $9 billion by 2021. According to market experts, e-commerce business in India was about $6 billion in value in 2012 and is expected to touch $76 billion by 2021 of which distribution, delivery and logistics constitutes around 12 per cent. 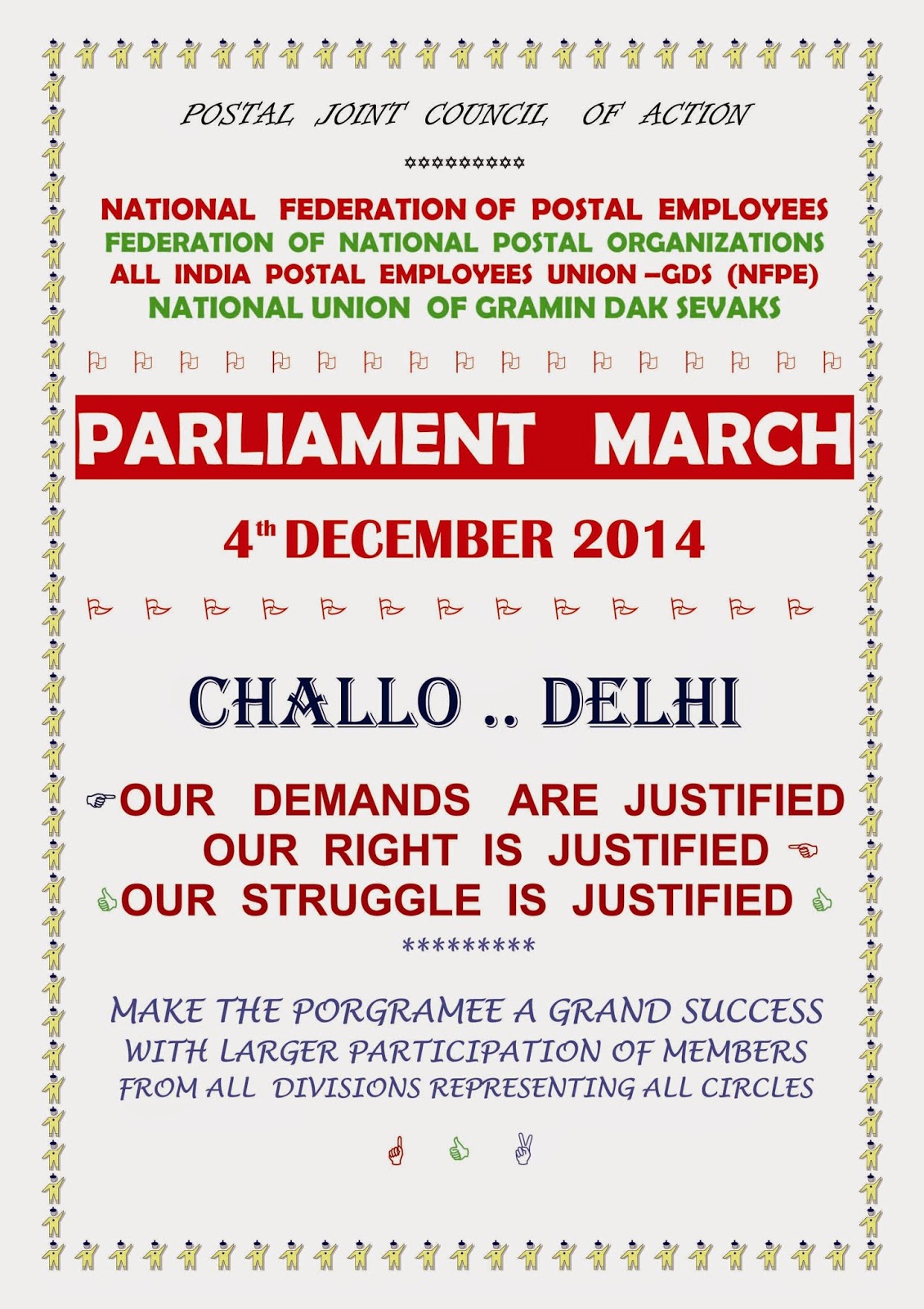 This time there is no separate accommodation is possible to provide to GDS comrades coming for participation in PARLIAMENT MARCH on 4th December 2014.

GDS Comrades are requested to adjust / stay with our NFPE Unions' comrades of respective Circles.

Now the temperature in Delhi is between 15 - 20 degrees and cold weather is prevailing.

III.   The locations where electrical power connection is there, it should have proper earthing and with one or two plug points along with on/off switch.

IV.     The above site preparation is to be done before the roll out starts for the particular Division.

V.        The data on BO such as the name of the BPM, contact details, address of the BO with land marks etc. may be updated and kept ready.

VI.      The availability of the network connectivity (Vodafone/ BSNL / Airtel etc.)at the BO location may also accessed and the best signal available in the BO may be identified and kept in order to facilitate the Vendor with details to drive best out of the project. If the network signal is not available, we have to identify as Off-line BO.

VII.  Similarly identification of the BOs where the solar UPS is not required due to installation problems of the solar panel or good power availability for more than 6 hours daily, has to be also done.

The complete information in respect of all BOs is to be uploaded to the specific webpage domain name (to be circulated shortly) on the India Post website by 30-12-2014.

It has been decided by the Government to introduce plastic notes in the denomination of Rs. 10/-. One billion plastic notes of the denomination of Rs. 10/- will be introduced in a field trial in five cities selected for their geographical and climatic diversity.
The primary objective of introduction of polymer/plastic notes is to increase its life and not to combat counterfeiting. The cities selected for field train are Kochi, Mysore, Jaipur, Shimla and Bhubaneswar.
The Reserve Bank of India has informed that since the proposal is at a trial stage, the decision on replacement of currency notes with plastic notes will depend on the outcome of field trial.
This information was given by the Minister of State for Finance, Shri Jayant Sinha in written reply to a question in Lok Sabha today. 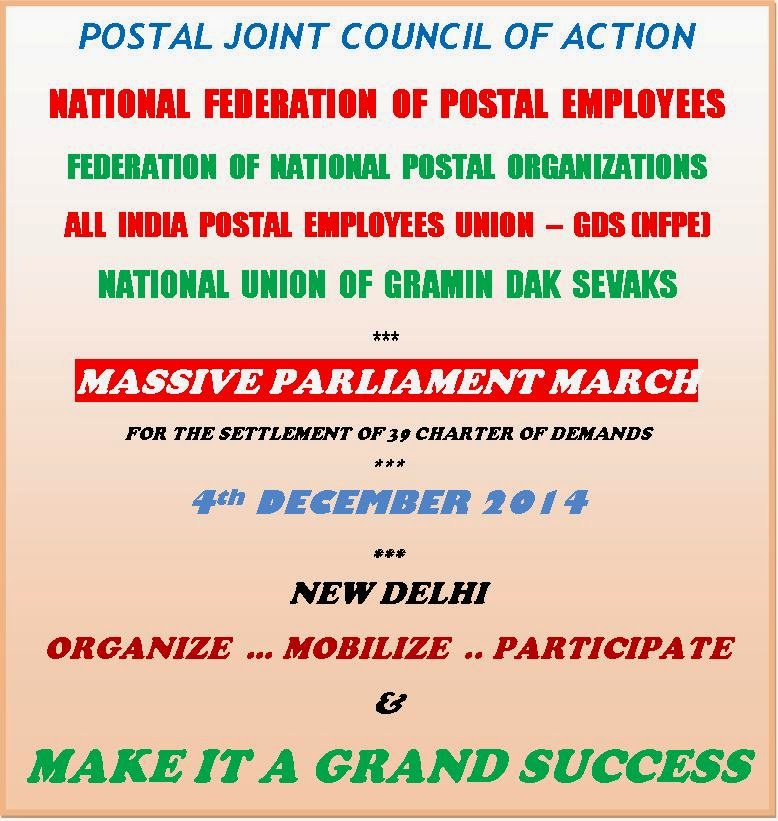 NDA  AND UPA
TWO  SIDES  OF  SAME  COIN
New Central Govt. under the leadership of our Hon’ble Prime Minister Shri. Narendra Modi has completed six months in office. As far as the common people and working class of this country is concerned, no positive action has been taken by the Govt. to mitigate their woes and grievances. Instead much negative steps are taken during this six months period.
Government has withdrawn the guidelines which controls the pricing of essential medicines through National Pharmaceutical Pricing Authority. As a result, the prices of essential medicines for treatment of cancer, blood pressure, cholestorol, diabetics, heart-deceases etc will shoot up in the market. Prices of medicines for treatment of cancer itself which now costs Rs.8500 may go upto Rs.1,08,000/-. Pharmaceutical corporate companies are the beneficiaries.
Government has made its intention clear that the number of gas cylinders (LPG) per year will be reduced from existing 12 to 9 and also to link it to Aadhar and subsidies through direct cash transfer to Bank accounts. Earlier UPA Govt. has reduced the gas cylinders from 12 to 9 but subsequently it has been withdrawn the order due to widespread protests.
Govt. has deregularised the pricing of diesel. Earlier UPA Govt. has deregulated petrol prices and now the NDA Govt. has deregularised diesel price. Petroleum companies will now be free to decide the prices of petrol and diesel. Even-now the prices of petrol and diesel in India are 40% higher than the prices in the international market.
Govt. has decided to allow 100% Foreign Direct Investment (FDI) in Defense Production. Earlier this move of the UPA Govt. was opposed by NDA saying that it is against the national interest and security of the country. Defense production will now be completely privatised.
Govt. has decided to allow 100% FDI in Railways and also public-private-partnership (PPP). During his speech delivered in Australia Prime Minister has called upon the Industrialists of that country to country to invest in Indian Railways. Doors for privatisation of Railways is opened.
Govt. has decided to allow 49% FDI in Insurance sector. The bill for amending the Insurance Act for this purpose is pending in the Parliament and Govt. spokes person has hoped that the bill will be passed in this winter session of Parliament.
Govt. has decided to disinvest the share of all public sector nationalised banks upto 48%. Road map for privatisation of banking sector is drawn.
Govt. has made it clear that 100% FDI will be allowed in Pension Funds. The future of those who are under the New Pension Scheme will be uncertain due to Pension Fund Privatisation.
Govt has decided to sell the shares of profit making public sector undertakings such as ONGC, BHEL, coal India Ltd. etc to the tune of 25%.
Govt. has made it clear that Indian Post Office Act 1898 will be amended to facilitate grant of licences to multi-national courier services.  This will pave way for privatisation of postal sector.
While extending red-carpet welcome to the corporates and multinational companies, the Govt. has declared that all the Labour laws which put hurdles before them will be amended. Govt. has already moved in Parliament Labour Law amendments to remove all the protections and rights now enjoyed by the working class including right to strike and right to form unions.
Government has declared that all the loss-making public sector undertakings will be closed or privatised.  Air India, BSNL etc. are all in the hit-list.
Government has made it clear that its slogan is “minimum government and maximum governance”.  It has imposed a total ban on creation of new posts and for filling up of posts which are lying vacant for more than one year.
Regarding Central Government Employees, none of their legitimate demands are conceded by the Government.  DA merger, Interim Relief, Inclusion of Gramin Dak Sevaks (GDS) under 7th CPC, Date of effect of 7th CPC as 1-1-2014, Removal of 5% condition for compassionate appointment - everything stands rejected.
Regarding Postal employees none of the 39 demands raised by Postal JCA (NFPE & FNPO) are settled.  Three lakhs GDS are still not included in the 7th CPC and their future is uncertain, Revision of wages of Casual, Part-time, contingent employees with effect from 01-01-2006 is pending before the Government from 2008 onwards.  Cadre Restructuring, issues of Postmaster Cadre, Accountants, System Administrators, MMS etc. all pending or rejected.
It is in the above background the Central Trade Unions, JCM National Council staff-side, Confederation of Central Govt. Employees & Workers and Postal JCA has decided to organise following agitational programmes.
1.      As a part of nation-wide agitation by all Central Trade Unions including BMS, INTUC, HMS, AITUC, CITU etc. has decided to organise Parliament March on 5th December, 2014 to protest against the anti-people, anti-labour policies of the NDA Government.  In the march they will declare future struggle programmes.
2.      All the organisations in the JCM National Council (Staff side) including Railways, Defence and Confederation has decided to organise a National Convention on 11th December, 2014 to decide future course of action for realisation of the legitimate demands of the Central Government employees.
3.      Postal JCA comprising NFPE, FNPO, AIPEU-GDS (NFPE) and NUGDS   has decided to organise a massive Parliament March of 20000 Postal & RMS employees including Gramin Dak Sevaks and Casual, Part-Time, Contingent employees on 4th December, 2014 demanding settlement of 39 point charter of demands.  PJCA has decided to go for indefinite strike.
NFPE calls upon the entirety of five lakh Postal employees to participate in all the above programmes and make it a grand success.  Let us pledge that we shall continue our struggle till success.
//copy//
Posted by P. Pandurangarao at 10:40 PM