Because of this particular situation the GDSs has lost their opportunity to have the chances to  appear the examination for each year i.e., one has to write examination for the vacancies of one/two/three years at a time.

Now the Dept. has reiterated the instructions issued previously on the subject and ordered to conduct the examination for the vacant posts of  each year separately  thus  the eligible GDSs are having the opportunity to write the examination in three times/attempts for the vacancy years of 2011, 2012 & 2013.

Copy of the order:

SUB:-HOLDING OF LIMITED DEPARTMENTAL COMPETITIVE EXAMINATION FOR  FILLING THE    POSTS OF POSTMEN/MAIL GUARD AND MULTI TASKING STAFF AS PER REVISED RECRUITMENT RULES.

Sir/Madam,
I am directed to invite a kind reference to the letter of even number dated 8-10-2012 wherein a detailed schedule was prescribed for holding of LDCE for Postmen/Mail Guard and MTS.
2.         Subsequently, the Nodal Branch Staff Section vide letter  No. 45-2/2011-SPB-I dated 18-10-2012 issued detailed instructions to the Circles for filling the vacancies by holding separate examinations for each year vacancies and given specific schedule and to complete the process by 30th June 2013.

3.         In view of this revised position, the schedule given by DE Section has no more operative and the instructions dated 08-10-2012 is withdrawn with immediate effect. The Circles are requested to follow the guidelines issued by SPB-I section letter No.45-2/2011-SPB.1 dated 18-10-2012 scrupulously.
4.         This issues with the approval of Competent Authority.
Yours faithfully,
Sd/-
(K.Rameswara Rao)
Assistant Director General (DE)

A large attendance of more than 300 GDS comrades from all divisions in the Circle were attended and paid keen attention to the speeches of the leaders. The GDS participants accepted the fact of conducting united struggles with NFPE will alone give fruitful results as experienced from the decades.

Com.Manjit Singh, Leader, Staffside, RJCM, Haryana Circle narrated the present situation of GDS organization and the unity as a need of the hour. Circle Secretary, P-IV is also attended.

Com.Naresh Gupta, Circle Secretary, AIPEU Gr.C., Haryana Circle and his team made good arrangements for successful conduct of the convention.

and other office bearers were elected unanimously for the AIPEU-GDS (NFPE), Haryana Circle.

The Convention was concluded with the vote of thanks by Com.Jaswir Singh, Circle Secretary, AIP AEA, Haryana Circle.

AIPEU-GDS(NFPE) Circle  convention has been held at Sugam Palace, Kapurthala town on 27-10-2012 under the Presidentship of Com. Lakshaman singh, President, Gr.c, Punjab circle.

The meeting was witnessed by the participation of nearly 700 GDSs representing from 11 divisions out of 13 divisions in the Circle. The participants expressed their desire and firm commitment to work under NFPE and its leadership and raised slogans for unity of GDS with NFPE.

With the able anchoring of Com.Rishpal singh, R-III Circle Secretary, Punjab Circle, the meeting is so much enlightened and very live.

The General Secretary, GDS requested all the comrades of Punjab circle to form Divisional Unions with the cooperation of Gr.C & P-IV Comrades at the earliest and organize effectively in all the branches of AIPEU-GDS(NFPE) in Punjab Circle and make the one day strike on 12-12-12 a grand success.

All the leaders appealed to make the one day strike on 12-12-12 a grand success with total participation of NFPE members including GDS comrades.

A set of 15 Office bearers were elected unanimously for AIPEU-GDS(NFPE), Punjab Circle.

An attempt made by a small group of intruders shouting slogans as ‘NFPE murdabad’ and to disturb the meeting became futile due to non-response of the participants, gathered in hundreds and the disrupters had no other role except to leave the conference hall. There after  the slogans rented the air with ‘NFPE zindabad, AIPEU-GDS zindabad’. The meeting was disturbed just for 5 minutes. This shows the disruptiveness of the anti-NFPE group.

AIPEU-GDS (NFPE) CHQ conveys its heartfelt thanks and congratulations to all the comrades and office bearers of the Punjab GDS Circle Union and all the organizers of the convention.

Posted by P. Pandurangarao at 9:45 PM

To all the viewers, colleagues, well-wishers & comrades,

ALL INDIA POSTAL EMPLOYEES UNION - GDS (NFPE)
Posted by P. Pandurangarao at 7:26 AM

BONUS FOR EMPLOYEES IN POSTAL DEPARTMENT FOR THE YEAR 2011-2012

Department sanctioned Productivity Linked Bonus for the accounting year 2011 - 2012
for 60 days to the employees in Group"D", Group "C" and Non-Gazetted Group "B"
with the ceiling of Rs.3500/-

Ex gratia payment of Bonus to Gramin Dak Sevaks for 60 days with the ceiling of Rs.2500/-

Ad hoc payment of Bonus to Casual Labourers who have been conferred to temporary status for 60 days. 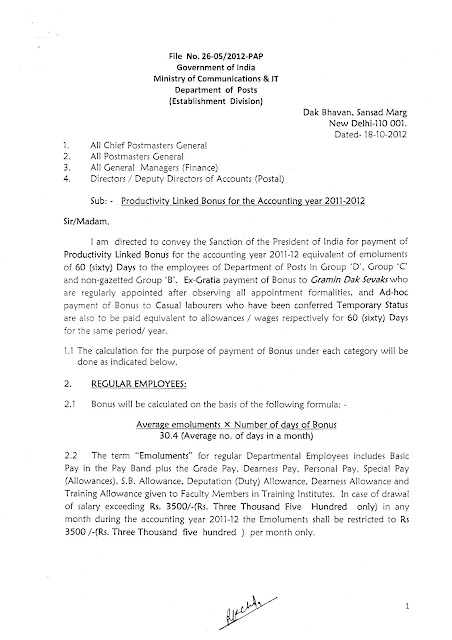 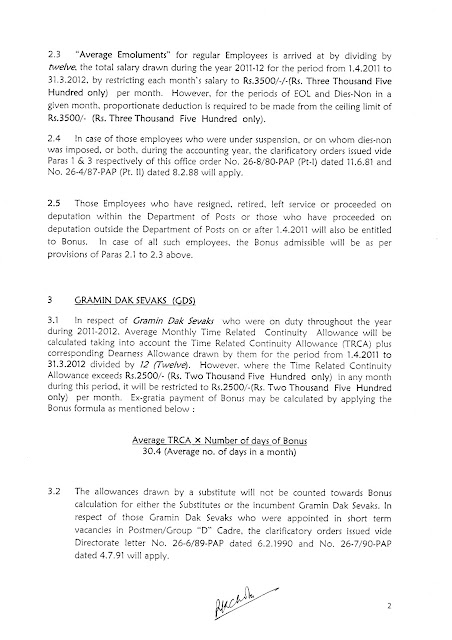 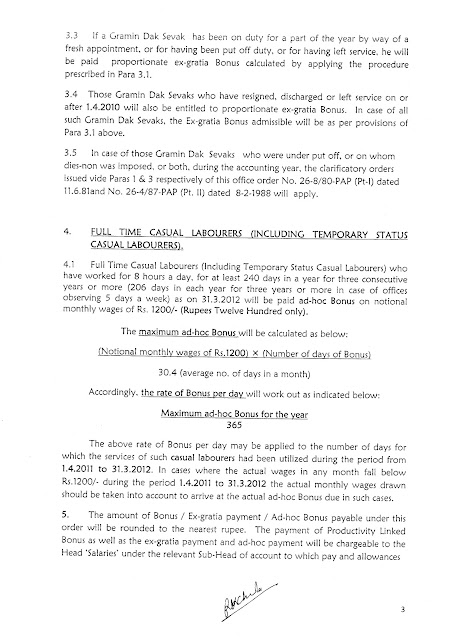 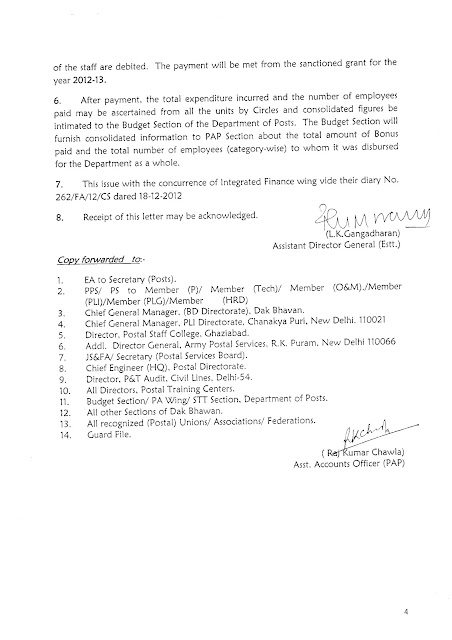 Posted by P. Pandurangarao at 5:00 PM

PROTECTION OF ALLOWANCES TO GDS

GDS ALLOWANCE PROTECTION
The recommendation of the DDG LEVEL COMMITTEE is to grant protection for one year and to give chance to the GDS to improve the workload.
Directorate orders will be issued accepting this recommendation as assured by Sri Sachin Pilot, Minister Communications for State to the JCA leaders at his residence.
= M. Krishnan, S/G NFPE.
Posted by P. Pandurangarao at 5:33 PM

ORDERS FOR DRAWL OF BONUS TO POSTAL EMPLOYEES   EXPECTING   SOON


POSTAL BOARD HAS SENT THE BONUS FILE TO THE HON'BLE MINISTER OF COMMUNICATIONS FOR APPROVAL.


REGARDING ENHANCEMENT OF BONUS CEILING TO GDS FROM Rs.2500 TO Rs.3500, AS THE FINANCE HAS AGAIN REJECTED THE PROPOSAL, THE HON'BLE COMMUNICATIONS MINISTER WILL BE TAKEN UP THE CASE WITH FINANCE MINISTER ITSELF AS PER THE ASSURANCE GIVEN TO THE JCA EARLIER.

Posted by P. Pandurangarao at 3:14 PM

The South Zone Study Camp conducted by NFPE in Chennai from 13th to 14th October, 2012 in Alamelumanga Kalyana Mandapam,T.Nagar, Chennai – 600 017 has given opportunity to participate Gramin Dak Sevaks represented from AIPEU-GDS(NFPE) also. Nearly 30 GDS officials, including 5 women GDS were also participated in the Study Camp.

The Trade Union Camp for the South Zone viz., Andhra, Tamilnadu, Karnataka and Kerala  commenced on 13th October, 2012 at Chennai . The two days camp commenced with the hoisting of the flag of the Federation and paying floral tribute to the Martyrs Column.

Dr.Venkatesh Athreya renowned economist took the class narrated the harmful policies being implemented since 1980s in the name of LPG in a vivid manner. Comrade J.Ramamurthy Circle Secretary P3 Tamilnadu gave vote of thanks.

Honourable Member of Parliament Comrade P.Rajeev took the class; covered all the basic problems of Indian Economy since Independence and concluded that only the reversal of all policies of Liberalisation will help Indian economy to stabiles. Comrade J.Sreevenkatesh Circle President of P3 Tamilnadu presided over the session. Comrade Dhanraj GDS NFPE CHQ Deputy General Secretary delivered vote of thanks.

There were question and answer interactive sessions after every topic. Over all around 200 Delegates attended the TU Camp and they got themselves fully involved in the session by their calm  and patience observation and interesting interaction at the end of the sessions.

The second day of the TU Camp of South Zone had three sessions. The first session was a class taken elaborately by Shri. M.C. Nair Retired Senior Superintendent of Post Offices. The session was presided over by Com. Sankar Circle Secretary R3 TN Circle.

In the second session Com.K.V.Sridharan  Ex-General Secretary P3 and Leader Staff Side JCM Departmental Council took the class and this session was presided over  by Com. J.Ramamurthy Circle Secretary P3 TN Circle.

There was an interactive session on both the above topics and both the faculty members answered all questions.

Secretary General NFPE Com. M. Krishnan elaborately narrated all the developments since two years and in detail covered the aspects of National Postal Policy and declared that through struggles our movement will advance and resist all anti-worker policies.

The Chief Cook Ramanathan was felicitated by the Reception Committee with a shawl presented to him by the Secretary General in appreciation of the great services rendered by the catering service in a very short time. Com.R.B. Suresh General Secretary Reception Committee finally rendered vote of thanks. The feed back collected from the Delegates about the TU Camp will be compiled and published later.

The arrangements, facilities, reception for smooth conduct of Study Camp are well appreciated by one and all  & the Reception Committee deserved with heartful thanks.
Posted by P. Pandurangarao at 3:13 PM