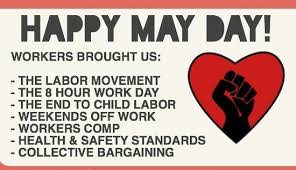 May Day Celebrated in the memory of .....
International Labour Day or May Day is celebrated to finish the struggle as well as to promote the requirement of eight-hour work day. Earlier the working condition of the laborer was very severe and working hours was 10 to 16 hour a day even in the unsafe conditions.
Deaths, injuries and other dreadful conditions of the workers were very common at the workplace during the 1860’s and working people were very agitated throughout the workday until the 8-hour workday was declared.
The rising death of the working class people (men, women and children) in many working industries, required to raise the voice for the safety of the working group people by decreasing their working hours in the industries. After the lots of efforts made by the workers and socialists, eight-hours was declared as the legal time for the workers in the national convention at Chicago in 1884 by the American Federation of Labor.
Many people have sacrificed their lives during the Haymarket Massacre which was held in the Chicago during the strike of workers. May Day is celebrated to commemorate the event of Haymarket Massacre as well as to promote the social and economic achievements of the working group people. 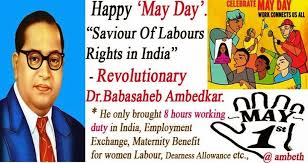 Posted by P. Pandurangarao at 8:15 AM