Greetings on the eve of International Women's Day 2020 (March 8th) 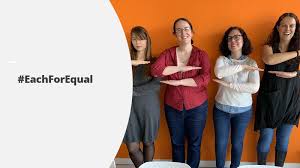 International Women's Day 2020 campaign theme is #EachforEqual
An equal world is an enabled world.
Individually, we're all responsible for our own thoughts and actions - all day, every day.
We can actively choose to challenge stereotypes, fight bias, broaden perceptions, improve situations and celebrate women's achievements.
Collectively, each one of us can help create a gender equal world.
Let's all be #EachforEqual.

#EachforEqual is about 'Collective Individualism'

The IWD 2020 campaign theme is drawn from a notion of 'Collective Individualism.'
We are all parts of a whole. Our individual actions, conversations, behaviors and mindsets can have an impact on our larger society.
Collectively, we can make change happen. Collectively, we can each help to create a gender equal world.
We can all choose to be #EachforEqual.

So put your arms out front and STRIKE THE #EachforEqual POSE to motivate others and to make International Women's Day YOUR day.
Do what you can to truly make a positive difference for women everywhere.

The 2020 #EachforEqual campaign runs all year long. It doesn't end on International Women's Day.
The campaign theme provides a unified direction to guide and galvanize continuous collective action, with #EachforEqual activity reinforced and amplified all year.

Collectively we can all play a part

Collective action and shared responsibility for driving a gender equal world is key.
International Women's Day is a global day celebrating the social, economic, cultural and political achievements of women - while also marking a call to action for accelerating gender equality.

The first International Women's Day occurred in 1911, supported by over one million people. Today, IWD belongs to all groups collectively everywhere. IWD is not country, group or organization specific.

Gloria Steinem, world-renowned feminist, journalist and activist once explained "The story of women's struggle for equality belongs to no single feminist nor to any one organisation but to the collective efforts of all who care about human rights."

. It's also a day when the world celebrates womanhood and if you are looking at getting inspired this Women's Day, we have a list of poweful slogans on women empowerment.

Posted by P. Pandurangarao at 8:49 AM