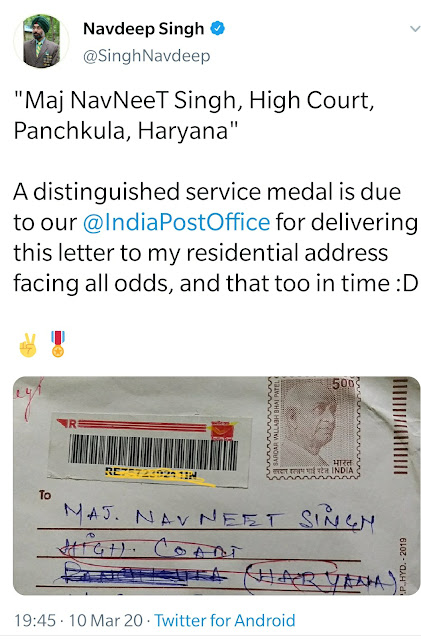 In an unusual turn of events, the Indian postal service delivered a letter correctly to a person despite it having incomplete address and wrong name.

A Twitter user Navdeep Singh shared the photo of the envelope with the caption: "'Maj NavNeeT Singh, High Court, Panchkula, Haryana'... A distinguished service medal is due to our @IndiaPostOffice for delivering this letter to my residential address facing all odds, and that too in time."

In the shared photo, it's not just the address that was incomplete, but the name mentioned was wrong too.

As the post went viral, Twitterati flooded social media with their reactions.

A user wrote, "In 1975, a letter written by me to my mother 'Mummy Kapurthala' reached her. Those were the days. Small towns. Postmen could perhaps sense from handwriting. I was among the few young officers, may be."

Another wrote, "Some of the established tradecraft of the postal services are beyond modern gadgets."

"Sir this is like before 47 when letters were simply postmarked to Gandhiji with no address written below," read one post.

Another user remarked, "They have delivered something to me when even the city and pin code was wrong. They are buggy. But efficient."

Posted by P. Pandurangarao at 9:39 PM