NFPE & AIPEU-GDS served strike notice on 12th August 2016 to the department to participate in 2nd September 2016 one day General Strike along with all employee' working class and Trade Unions.

All the members of AIPEU-GDS are requested to mobilize, organize the GDS comrades and participate in the one day General Strike on 2nd September 2016 in all Divisions of all Circles. 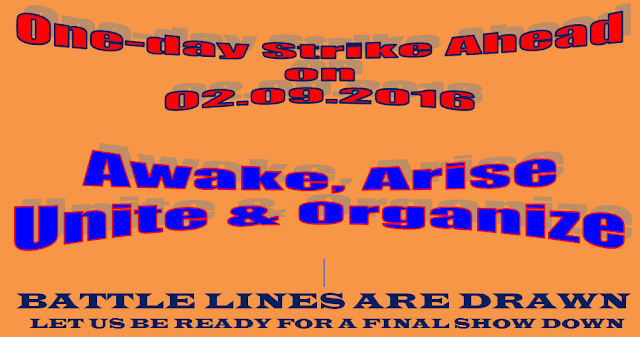 12 Point Charter of Demands
PART – A

1.    Urgent measures for containing price rise through universalization of public   distribution system and banning speculative trade in commodity market.
2.    Containing unemployment through concrete measures for employment generation.
3.    Strict enforcement of all basic labour laws without any exception or exemption and stringent punitive measures for violation of labour laws.
4.    Universal social security cover for all workers.
5.    Minimum wage of not less than 18000/- per month with provisions of indexation (for unskilled worker).
6.    Assured enhanced pension not less than 3000 p.m for the entire working population (including unorganized sector workers).
7.    Stoppage of disinvestment in Central/state public sector undertakings.
8.    Stoppage of contractorisation in permanent/perennial work and payment of same wage and benefits for contract workers as that of regular workers for the same and similar work.
9.    Removal of all ceilings on payment and eligibility of bonus, provident fund and increase in quantum of gratuity.
10.  Compulsory registration of trade unions within a period of 45 days from the date of submitting application and immediate ratification of ILO conventions C-87 & C-98.
11.  No FDI in Railways, Defence and other strategic sectors.
12.  No unilateral amendment to labour laws.

(Demands of the Central Govt. employees including Postal)