After a long time, a delightful, colorful and peaceful conference is conducted for GDS in Tamil Nadu,  with an admiration, many of the comrades appraised the spectacular gathering of more than 1200 GDS comrades for this session representing  all most all Divisions of the Circle. This GDS conference made possible unity of all NFPE unions at one place for the cause of GDS is highly a remarkable one and significantly a legendary movement particularly in Tamil Nadu.

More than 30 vehicles observed in the premises of venue carried by GDS comrades from all corners of the Circle.
The leadership represented from all NFPE affiliates viz.,

The General body meeting ably presided over by Com. R.Dhanraj, Deputy General Secretary (CHQ) till election process commenced. After that Com.S.Ramaraj, President took the Chair and capably conducted the meeting till conclusion.

Com.P.Pandurangarao, General Secretary, GDS (NFPE) inaugurated the Conference. Some of the GDS comrades made deliberations in the session.

All India Conference of AIPEU-GDS(NFPE) is proposed to hold in Chennai, Tamil Nadu Circle, a resolution moved in the august body is unanimously approved.

All the other details will be published soon. CHQ is sincerely thanking all Tamil Nadu Comrades for taking the responsibility to hold AIC in a gigantic way.

Spontaneously a sum of Rs.10,000/- is handed over to Com.M.Krishnan & Com.K.V. Sridharan as donation for AIC by the comrades of Namakkal and Chengalpattu Divsions (Rs.5000/- each).

A resolution proposed that all GDS comrades will participate in 12-12-2012 strike along with all Postal employees in Tamil Nadu Circle is approved unanimously.

Further it is proposed to conduct all the programs taken up by NFPE in Tamil Nadu Circle, the GDS(NFPE) union will all take part of it, is accepted and approved by the General body. 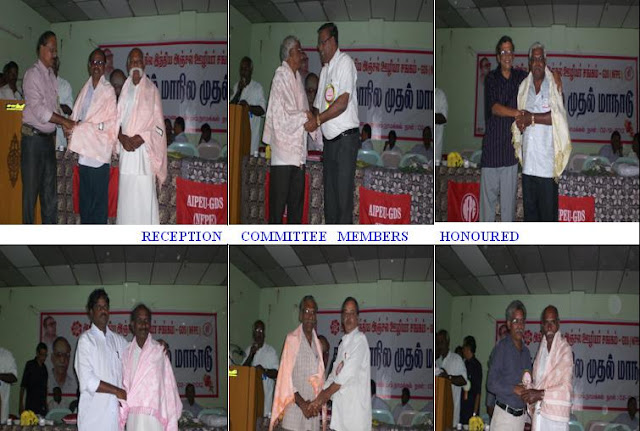 The session concluded with the proficient presentation of vote of thanks by Com.Ponnuswamy, Divisional Secretary, GDS (NFPE), Namakkal Division.

Reception Committee, Namakkal Division with their team spirit taken arduous job to conduct the Circle Conference for GDS, Tamil Nadu, with excellent arrangements for the Comrades and Leaders and made it a historical success.

AIPEU-GDS(NFPE) CHQ conveys its sincere gratitude, heartfelt  greetings and congratulations to all the comrades of Tamil Nadu & Namakkal Division in particular.
Posted by P. Pandurangarao at 12:14 PM