the propaganda made by Mahadevaiah group GDS union is TOTALLY FALSE.

Finance Ministry HAS NOT APPROVED the proposal for raising the GDS Bonus ceiling to Rs.3500- but rejected it.

During his last strike also he has made such false propaganda saying strike is 100%.

given letter to the administration to take action against those who participated in the 12th December strike.

The following copy of letter submitted by Circle Secretary, AIPEDEU, Assom to the Chief Post Master General, mentioned as :

........... it is hardly requested to release a notice of "No work, no pay" to all postal employees and alert notice of termination to the employees, who have not been completed three years of their regular service positively before the strike on 12-12-2012. your positive action in this concern will surely remove all confusions about the limitations as a govt. employee.......... 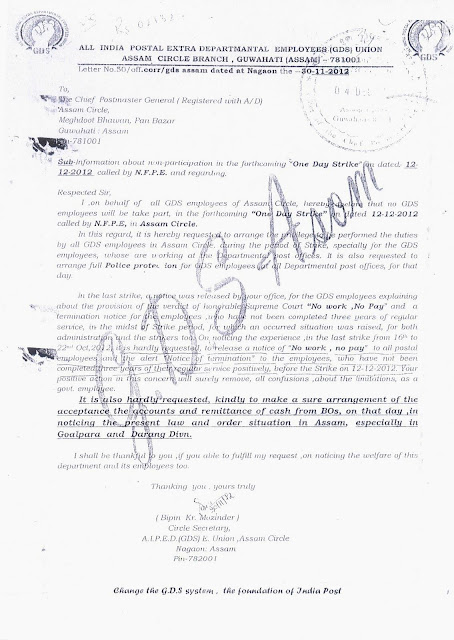 Posted by P. Pandurangarao at 7:55 PM