It is well aware that the Membership verification process in GDS Cadre is going on in all Divisions and Circles.  All the leadership of NFPE and AIPEU-GDS are deeply immersed in the exercise of collecting Letter of Authorization from the GDS members in all corners of the country.

The collection of membership in favour of AIPEU-GDS is in a progressive way by overcoming all hurdles by our Comrades & well-wishers as reports received by our CHQ from many parts of the Circles, every day. This is an encouraging and inspiring issue to all our GDS comrades.

Our efforts for the last five years will not be failed. We are confident that AIPEU-GDS will get NUMBER ONE position in the Recognition amongst GDS unions in the present verification process.

Simultaneously, the implementation of the Recommendations of Kamalesh Chandra Committee is also the most important task for our GDS. Also demanded in the 10 point Charter of NFPE  along with the series of agitations, our GDS comrades are participating en masse in all the agitational programmes at all levels and became a part of the success of all programmes.

THE PROGRAMME OF ACTION ISSUED BY AIPEU-GDS i.e.,., MARCH TO SANCHAR BHAWAN (O/o the Minister of Communications & IT), NEW DELHI is the decision taken in 3rd Central Working Committee meeting held on 5th May 2017, Trivendrum.

All the CHQ Office bearers, Circle Secretaries, Division / Branch Secretaries, Active Comrades, well-wishers of our Union are once again requested to mobilize the GDS comrades in hundreds from all Circles to roar with thousands in front of Sanchar Bhawan on 27th July 2017 to show our resentment and anger over the delay in the implementation of the the recommendations of Kamalesh Chandra Committee. 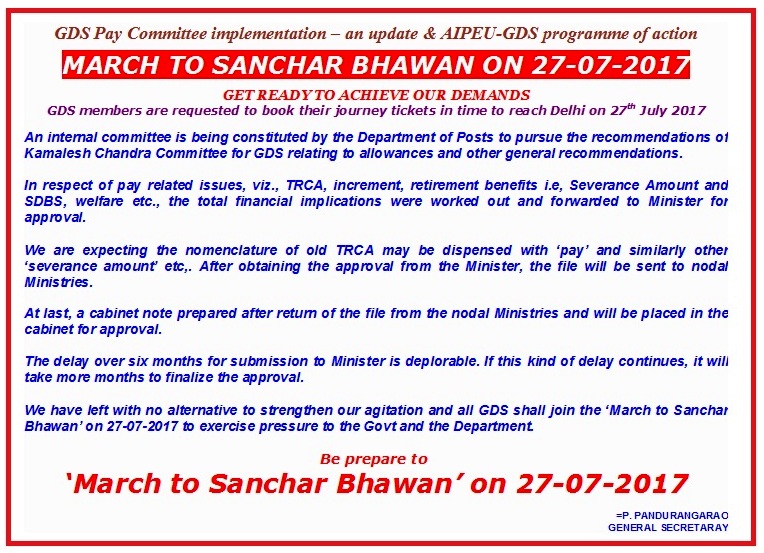