MAKE THE AIPEU-GDS AS NUMBER ONE RECOGNIZED UNION

AIPEU-GDS CHQ receiving interesting & encouraging reports from all Circles on the process of Verification of Membership in GDS cadre.

AIPEU-GDS is advancing in all the Divisions of all Circles, obtaining the 'Letter of Authorization' from GDS comrades.

AIPEU-GDS is well established in 90% of the Divisions and organized the GDS comrades in all the Divisions, conducted & participated in individual & united struggles for the cause of GDS and postal working class as well for the last five years.

The Representatives of AIPEU-GDS in field units are more active and committed to the progress of AIPEU-GDS  from its grass-root level.

Only 25 days are left to submit the 'Letters of Authorization'  collected from GDS comrades in favour of AIPEU-GDS.

All the Divisional Secretaries / Conveners are requested to prepare 3 copies of the list containing the details of the GDS members in favour of AIPEU-GDS to submit to the Divisional Head on or before 5th September 2017.

Two copies of the list will be submitted along with "Letters of Authorization" to the Divisional Head and 3rd copy will be acknowledged by the concerned for Union copy.

If, no such representation is submitted, the membership of the respective GDS will become invalid and treated as 'non-member' i.e., not belongs to any of the participant GDS union.

AIPEU-GDS CHQ IS REQUESTING ALL THE GDS COMRADES OF ALL DIVISIONS - FRANCHISE YOUR OPTION IN FAVOUR OF AIPEU-GDS & ENROLL YOUR MEMBERSHIP IN AIPEU-GDS.

MAKE OUR AIPEU-GDS AS
NUMBER ONE RECOGNIZED UNION 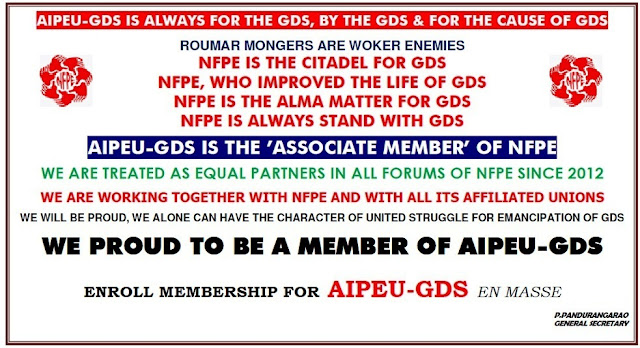