Gandhiji said, ‘Intellectually, mentally, and spiritually, woman is equivalent to a male and she can participate in every activity."

From Sita in Ramayana to Kannagi in Silapathikaram to Rani Jhansi are not only celebrated women but also their contribution to social change and awareness had been immense. Even Ramakrishnaparmahamsar is said to have worshipped his wife.

Gender is western concept. India is the original home of the Mother Goddess. women in India have always been honored and respected.

Article 14 of the constitution accords equality for both genders.

India has led the world in ratifying UN Conventions and international covenants like the Convention for the Elimination of All Forms of Discrimination against Women (CEDAW) and the Beijing Platform for Action.

Only in India Woman is worshipped as Sakthi [Strength], Saraswathy [Knowledge] and Lakshmi [Prosperity]. No other country or religion in the world worships women hood in the way India does. In Hindu Mythology women is said to have been given absolutely 50% of Mental, Spiritual and physical space in the life of a man, when Shiva is illustrated to have done this in Arthnareeswarar form.

India is fortunate to have had many great women - Auvaiyar, Annie Besent , First women president of Indian national Congress, Nevedita, Vijayalakshmi Pandit, First Indian Woman President of UN General Assembly, Mother Teresa, Sarojini Naidu to Indira Gandhi only the second woman Prime Minster in the world, to Kalpana Chawla, Indra Nooyi to Pratibha Patil first women President of India and many more in the Indian Corporate sector who have proved to be more than a match . Their contribution to society in whole and to Women in Particular is invaluable. In Modern Indian society women are playing stellar role, even challenging the males in Politics. More importantly their role in family building, society development is stupendous. Indian woman is emerging out of their conventional role, realizing their unlimited potential and have begun to take major role in all walks of life.

Indian woman is beautiful, gentle, motherly yet powerful. Indian society look upto their women folk to take the lead, which is slowly happening. When India becomes a superpower, surely there will be significant contribution from great women. 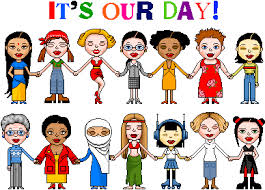 The 2016 theme for International Women’s Day is