The government is coming up with an 'Aadhaar Payment App' that could silence digital payments critics. The new app would do away with plastic cards and the point of sale machines once believed to be essential for a less cash society.

The app, to be launched on December 25, would also eliminate the fee payments for service providers like card companies such as Mastercard or Visa, which has been a stumbling block in merchants switching to digital payments making it affordable to even merchants in remote villages, said people familiar with the development. All that it needs is an Android phone with the merchant. 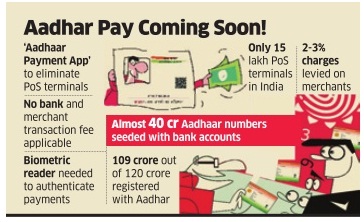 HOW DOES IT WORK?

Merchants need to download the Aadhaar cashless merchant app on their smartphones connected to a biometric reader, which is currently available for Rs 2,000. The customer will then feed his or her Aadhar number into the app, select the bank through which the transaction will take place, and the biometric scan will work as a password for the transaction to be authenticated. "This app can be used by a person to make payments without any phone, Unique Identification Authority of India (UIDAI) CEO Ajay Bhushan Pandey told ET. "Almost 40 crore Aadhaar numbers already stand linked to bank accounts - that is half the adults in India. The aim is to link all Aadhaar numbers with bank accounts by March, 2017."

The government, along with the regulator and payments companies, is working to ensure that the objective of making digital payments a reality across the country.

IDFC Bank along with UIDAI and National Payments Corporation of India have developed this app which would be launched at the national level on Sunday. The new technology was shown to finance Minister Arun Jaitley and information and technology minister Ravi Shankar Prasad on December 19.

"The settlement is done through the Aadhaar bridge, which means it con nects a much wider set of people," said Rajiv Lall, MD & CEO at IDFC Bank."Anybody who has Aadhaar seeding done can make payments to merchants with this app. It wouldn't matter if the person does not have a credit or debit card, or even a mobile phone.''The acceptance of point of sale terminals in the country has been slow with only 15 lakh terminals deployed by various banks.

Furthermore, the lack of connectivity made it impossible for millions of merchants in the hinterland to adapt the card payment methods. There are over 15 lakh such machines for a population of 125 crore and nearly 5 crore merchants. If the 1.5 lakh bank branches in the country register even 20-25 merchants in their vicinity, it could boom.