Ranchi: India Post, Jharkhand, will become the first in the country to open a bank branch India Post Payments Bank (IPPB) in January.
The basic preparations in terms of infrastructure, manpower and training have been completed. 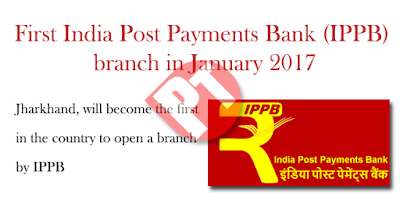 Talking to TOI, post master general, Jharkhand circle, Anil Kumar said that the first bank branch will begin operations at GPO, Doranda, for which a separate building has been constructed. "Once the GPO branch becomes functional, all other post offices in the state will also start functioning," Kumar said.
The move to came after Prime Minister Narendra Modi announced that all post offices should be converted to banks by January next year. The IPPB was incorporated as a public limited company, under the department of posts, Government of India, in August 2015 with 100% government equity.

There are more than 2,800 India Post offices across the state and the number is likely to be increased to 3,400. "In addition, we have over 100 panchayat seva kendras (PSK) and over 4,000 postmen who can work as business correspondents," Kumar said.
The postmen are being provided with PoS machines. Officials will not only receive money for deposits and disburse payments but will also open new accounts, sell insurance instruments and register money orders. At present, the postal department has issued kits to over 2,700 post offices, which includes a biometric device, printer and a tab for digital transactions.
Kumar said that more than 500 people have already been trained on financial inclusion tools, the usage of PoS machines and briefed on the functioning of post offices as business correspondents. "We have hired experts from Infosys and Rico for training our staff and the training is going on in Ranchi and Jamshedpur," Kumar said.
India Post has also issued debit cards to saving account holders in post offices and once the banking facility begins, more debit cards will be issued. "It will work as full-fledged banks in the wake of the existing robust infrastructures in the remote corners of the state," Kumar said.
Out of 456 post offices, 358 have already been brought on the CBS platform and this is all set to boost the banking structure of Jharkhand post offices once the headquarter branch becomes operational.
Source : http://timesofindia.indiatimes.com/