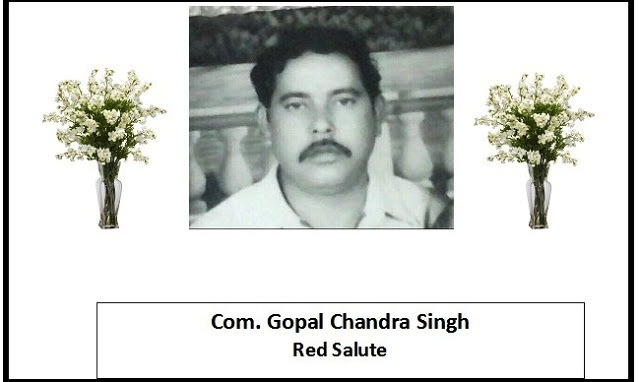 Comrade Gopal Chandra Singh, GDSMP, Maguria Town S.O. under Purulia Division , West Bengal Circle and the Divisional GDS Secretary of AIPEU-GDS (NFPE) breathed his last on 15.12.2016 in New Delhi. He came to participate in the 'Parliament March' at the call of the Confederation. He could not participate in the March as he fell sick from the previous night, reportedly from chest pain, and was taking rest at the Kalibari, where the West Bengal comrades stayed. He was brought to Ram Manohar Lohiya Hospital, New Delhi by our comrade and stayed back at kali Bari after medical treatment.

But during the day of the program, his condition became worsen and breath his lost at Kalibari. He is aged 51, left two daughters with their mother and old aged parents at home. His brother came to New Delhi to receive his mortal body after post-mortem.

He organized the GDS as Divisional Secretary since 2012 to the great extent.

Confederation, NFPE (CHQ) & Circle Unions express deepest condolence to the bereaved family for the sudden irreparable loss. We shall surely stand support to the family.

Our tribute and Salute to Comrade Gopal Chandra Singh.

The AIPEU-GDS CHQ conveyed sincere thanks to all the Leaders of Confederation, NFPE and West Bengal for extending their timely actions and assistance to the Comrades till the conclusion of all formalities in Delhi besides sending the mortal remains to the native place of the deceased Comrade. Thanking one and all.

The AIPEU-GDS CHQ dips its banner in respect of the departed soul and conveyed deep sense of grief and condolences to the bereaved family members.