Post offices in Jharkhand are no more restricted to mere deal with envelops or parcels. Now, one can get items of his/her daily need, right from toothpaste to apparels and LED bulbs to designer craft, from post offices. 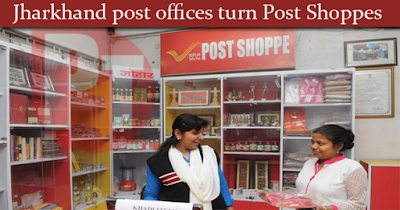 The postal department has so far started Post Shoppe in 13 head post offices and planned to take it to all branches across the state to revive and give a new dimension to the post office services. Jharkhand has 3300 post office branches currently, which will go up to 4,000 by end of this year.

“Post Shoppe will be started in every district headquarter within a month. Thereafter, it will be extended to Panchayat level,” said Anil Kumar, chief post master general, Jharkhand circle.
Jharkhand wing of India Post has tied up with Kasturba Khadi Gramodyog Sansthan (KKGS), Muri to sell Khadi India products from Post Shoppes.
Sale of Khadi products including apparel, bag, handicrafts, herbal products, incense sticks, sandal products, beauty products and spices have started from Ranchi’s two branches from Wednesday. The sale of Khadi India products will start in 13 other head post offices of the state in a week.
“We have already been selling several items like gift pack, envelop, tribal handicrafts, Archie’s cards and products of Patanjali brand from Post Shoppes. Khadi products are the new addition to the list,” Kumar said, adding, our objective is to provide all items of daily need under one-roof, that will not only benefit people but also give strength to postal department.
The Jharkhand wing of India Post has launched several schemes such as sale of Ganga Jal, LED bulbs and non-judicial stamps that were later adopted by many states in the country.
“All three schemes including Ganga Jal, LED bulbs and non-judicial stamps have been a huge success in Jharkhand,” Kumar said, adding, we have made Rs 1.57 crore additional earning in one year from the new initiatives. “It is expected the earning to cross Rs 2 crore mark by March end,” he said.
Jharkhand Post has recently started selling of railway tickets. “We are selling railway tickets from 14 post offices, which will be extended to 50 shortly. Our purpose is to start selling of railway tickets in remote areas of the state where people have to travel a long distance to railway station for tickets,” Kumar said.
A consumer Ravi Ranjan, an under-graduate student, said, “Majority of the products of daily need are available here. I take the opportunity to buy something whenever I visit post office.”
A 45-year-old, Raju Mahato, who visited Post Shoppe, urged the postal department also to make provision of generic medicine at the Shoppe, which would help the poor.

Posted by P. Pandurangarao at 7:54 PM