A panel of key secretaries, set up by Prime Minister Narendra Modi, has proposed a major “revamp” of India Post to help expand the reach of e-commerce to every corner of the country, official sources told FE.
India Post boasts of more than 1.5 lakh post offices across the nation, with 90% of them located in rural areas—a reach, if encashed properly, can be a potent weapon in revolutionalising e-commerce in the country. (PTI)

A panel of key secretaries, set up by Prime Minister Narendra Modi, has proposed a major “revamp” of India Post to help expand the reach of e-commerce to every corner of the country, official sources told FE. Any such step will not just boost operations of players such as Amazon, Flipkart and Snapdeal that are struggling to supply to remote areas due to high logistics costs but also help reverse the sliding fortune of India Post, which was once the lifeline of communications in India.

At present, areas covered by close to a half of the PIN (Postal Index Number) codes in the country are beyond the reach of e-commerce players. While there is no regulatory hurdle for post offices to handle consignments of e-commerce companies now, India Post has to liaise with such players more aggressively, rationalise staff in remote areas and deliver items even faster (at reasonable rates) to be able to grab more orders from them, a senior government official said. “India Post has to firm up a long-term strategy fast and make suitable changes internally to tap e-commerce. It has started taking orders from e-commerce players, but miles to go,” said the official.

The limited reach of e-commerce reflects the serious bottlenecks in providing last-mile deliveries to customers in rural areas, obstructing the growth of the otherwise booming e-commerce sector, the panel has observed in its report submitted with the Prime Minister.

The panel includes secretaries of the departments of commerce, industrial policy and promotion, external affairs, steel, labour, textile, MSME and tourism, and the chairman of the central board of excise and customs. Commerce secretary Rita Teaotia was the rapporteur of the panel, a source said.

However, boosting the reach of e-commerce through India Post will require a massive rationalisation of costs by the state-run communication behemoth. For instance, while the average cost of a delivery by speed post cost it almost Rs 67 in 2015-16, the revenue earned was just Rs 39, showed the data by the postal department. Importantly, while the average cost rose Rs 8 from Rs 59 in 2014-15, the revenue increased by only Rs 2. This means India Post was unable to pass on the rise in costs to customers, partly due to the fact that private players in cities and semi-urban areas are giving it a tough competition. Similarly, while the average cost of a parcel for India Post was Rs 68 in 2015-16, the revenue earned was just Rs 44.
However, the sources said in rural areas, where the penetration of other logistics providers is very low, India Post can be the prime driver of e-commerce. 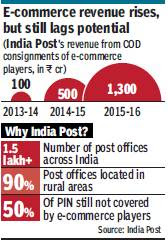 India Post boasts of more than 1.5 lakh post offices across the nation, with 90% of them located in rural areas—a reach, if encashed properly, can be a potent weapon in revolutionalising e-commerce in the country. On an average, a post office serves an area of 21.23 Sq Km and a population of 8,086 people.

The e-commerce market in India is growing at a brisk pace. Last year, a report by industry body CII and consultancy firm Deloitte forecast that the Indian e-commerce (B2C) market could grow to almost $102 billion by 2020 from just $16 billion in 2015, riding factors such as government initiatives like Digital India, increase in internet penetration, growth in the adoption of smartphones and evolution of new payment solutions, among others. The number of online shopper could rise to 220 million by 2020 from just 39 million in 2015, the report said.

Posted by P. Pandurangarao at 7:06 PM