The response to the indefinite strike call from GDS Unions are increasing day by day.

The CHQ AIPEU PM&MTS served strike notice for indefinite strike from 23rd May 2018. Accordingly the P4 union in all Circles getting prepared for the strike.

It is reported that Odisha, Assam, North East, UP, HP, MP, Gujrat AIPEU GDS members are making all preparations for the en masse participation in the ensuing indefinite strike.

Strike campaign and tour programmes are going on in the Circles / Divisions to mobilize the GDS to participate in the serious struggle action.

The resentment & anger is growing day by among the GDS comrades all over India as there is no response from the Govt & Department towards resolution on  the issue of the implementation of Kamalesh Chandra Committee recommendations.

GDS comrades all over India are forced and determined to participate in the ensuing indefinite strike from 22nd May 2018.

Let us sacrifice for our justified demand & will achieve it successfully.
MAKE THE INDEFINITE STRIKE A GRAND SUCCESS 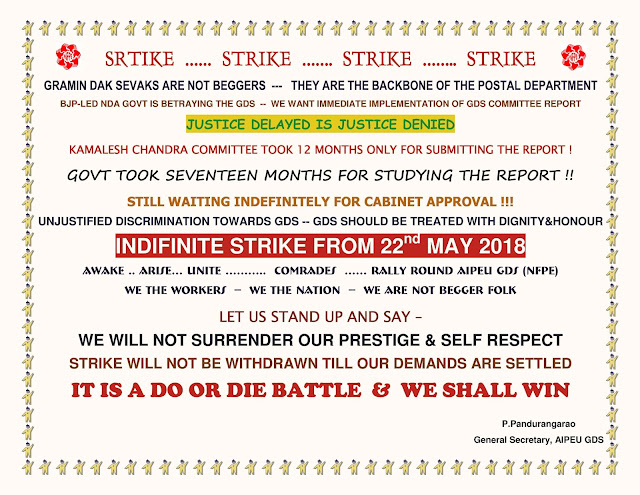