Today  the third round of talks with the Administration in the presence of Regional Labour Commissioner (Central), Delhi is again failed.

Preliminary reports received by CHQ from the Circles, strike participation by GDS & Departmental employees  is very high up to 95% in many Circles and mixed result in some circles. However, GDS participation is 100% in some places.

After issuing strike notice  first round of talks with Administration took place on 18-05-2018 with the Addl. DG and other Senior officers of the Directorate was failed.

The second round of talks on 21-05-2018 with Administration viz., Secretary, Department of Posts,  DG, Posts, Addl. DG & other Senior officers of the Directorate was also failed.

From Union side we have requested the Department to give a concrete assurance on the date of implementation of the GDS Committee. But the Officers requested to call off the strike.  With this disagreement, our Union is decided to continue to the indefinite strike.

Discussion went on for two hours. But the Administration is not ready to give any assurance on the date of implementation of GDS Committee and some other  questions raised by the unions.

With this disagreement, all Unions decided to continue their strike till the demand is settled. 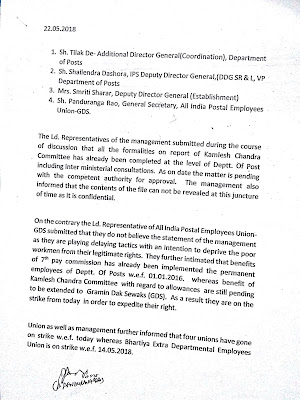 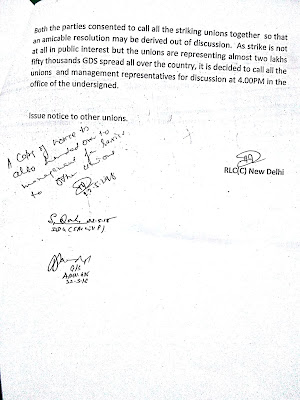 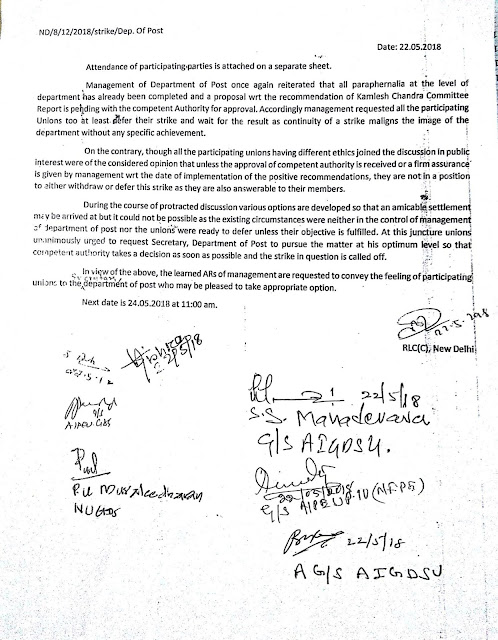 Posted by P. Pandurangarao at 9:03 PM