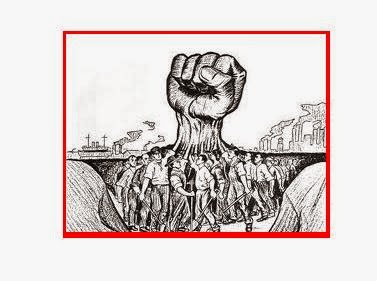 International Workers' Day is the commemoration of the May 4, 1886 Haymarket affair in . The police were trying to disperse a public assembly during a general strike for the eight-hour workday, when an unidentified person threw a bomb at the police. The police responded by firing on the workers, killing four demonstrators. "Reliable witnesses testified that all the pistol flashes came from the center of the street, where the police were standing, and none from the crowd. Moreover, initial newspaper reports made no mention of firing by civilians. A telegraph pole at the scene was filled with bullet holes, all coming from the direction of the police.
In 1889, the first congress of the Second International, meeting in Paris for the centennial of the French Revolution and the Exposition Universelle, following a proposal by Raymond Lavigne, called for international demonstrations on the 1890 anniversary of the protests. May Day was formally recognized as an annual event at the International's second congress in 1891
Subsequently, the May Day Riots of 1894 occurred. In 1904, the International Socialist Conference meeting in  called on "all Social Democratic Party organizations and trade unions of all countries to demonstrate energetically on May First for the legal establishment of the 8-hour day, for the class demands of the proletariat, and for universal peace." The congress made it "mandatory upon the proletarian organizations of all countries to stop work on May 1, wherever it is possible without injury to the workers.
In many countries, the working classes sought to make May Day an official holiday, and their efforts largely succeeded. May Day has long been a focal point for demonstrations by various socialist, communist and anarchist groups. In , May Day coincides with Walpurgisnacht. May Day has been an important official holiday in countries such as the People's Republic of , ,  and the former . May Day celebrations typically feature elaborate popular and military parades in these countries.
In the and , the official holiday for workers is Labor Day in September. A September holiday was first proposed for the in the 1880s, before the Haymarket affair. Groups in were already celebrating a Labour Day. In 1887,  was the first state to make it a public holiday. By the time it became a federal holiday in 1894, thirty states officially celebrated Labour Day. After the Haymarket affair, US President Grover Clevel and feared that commemorating Labor Day on May 1 could become an opportunity to commemorate the affair. Thus, in 1887, it was established as an official holiday in September to support the Labor Day that the Knights favored.
In 1955, the Catholic Church dedicated May 1 to "Saint Joseph The Worker". is for the Church the patron saint of workers and craftsmen (among others).
::: in INDIA:::
The first May Day celebration in India was organised in Madras (now Chennai) by the Labour Kisan Party of Hindustan on 1 May 1923. This was also the first time the red flag was used in India. The party leader Singaravelu Chettiar made arrangements to celebrate May Day in two places in 1923. One meeting was held at the beach opposite to the Madras High Court; the other meeting was held at the Triplicane beach. The Hindu newspaper, published from reported,
The Labour Kisan party has introduced May Day celebrations in . Comrade Singaravelar presided over the meeting. A resolution was passed stating that the government should declare May Day as a holiday. The president of the party explained the non-violent principles of the party. There was a request for financial aid. It was emphasized that workers of the world must unite to achieve independence.
May Day is a nationwide bank and public holiday in . The holiday is tied to labour movements for communist and socialist political parties.
Labour Day is known as "Kamgar Din" in Hindi, "Kamgar Divas" in Marathi and "Uzhaipalar Dinam" in Tamil. On this day, banks and other public organizations in Assam, Bihar, Goa, Karnataka, Kerala, Manipur, Pondicherry, TamilNadu, Tripura,  West Bengal and Orissa observe a holiday. In , Labour Day is mostly not given its previous importance as a holiday now.
May 1 is also celebrated as "Maharashtra Day" & "Gujarat Day" to mark the date in 1960, when the two western states attained statehood after the erstwhile  was divided on linguistic lines. Maharashtra Day is held at Shivaji  in central Mumbai. The Governor of the state takes the salute at the ceremonial parade, comprising members of the state reserve police force, Brihanmumbai Commando Force, home guards, civil defence, fire brigade and city police. Schools and offices in remain closed on May 1. A similar parade is held to celebrate Gujarat Day in Gandhinagar.
Posted by P. Pandurangarao at 10:02 PM